Motto: It is better to light a candle than to curse the darkness

Vision: Amnesty International’s vision is for every person to enjoy all the rights enshrined in the Universal Declaration of Human Rights and other international human rights standards.

Mission: Amnesty International’s mission is to conduct research and generate action to prevent and end grave abuses of human rights and to demand justice  for those whose rights have been violated.

Amnesty International is a worldwide movement of people who campaign for internationally recognized human rights to be respected and protected for everyone.

There are six key areas which Amnesty deals with:

In 1961 a British lawyer, Peter Benenson, launched a worldwide campaign, ‘Appeal for Amnesty 1961’ with the publication of a prominent article, ‘The Forgotten Prisoners’, in The Observer newspaper. The imprisonment of two Portuguese students, who had raised their wine glasses in a toast to freedom, moved Benenson to write this article. His appeal was reprinted in other papers across the world and turned out to be the genesis of Amnesty International.

The first international meeting was held in July, with delegates from Belgium, the UK, France, Germany, Ireland, Switzerland and the US. They decided to establish “a permanent international movement in defense of freedom of opinion and religion”.

A small office and library, staffed by volunteers, opened in Peter Benenson’s chambers, in Mitre Court, London. The ’Threes Network‘ was established through which each Amnesty International group adopted three prisoners from contrasting geographical and political areas, emphasizing the impartiality of the group’s work.

On Human Rights Day, 10 December 1961, the first Amnesty candle was lit in the church of St-Martin-in-the-Fields, London.

In January 1962 the first research trip was undertaken.  This trip to Ghana, was followed by Czechoslovakia in February (on behalf of a prisoner of conscience, Archbishop Josef Beran), and then to Portugal and East Germany.

The Prisoner of Conscience Fund was established to provide relief to prisoners and their families. AI’s first annual report was published; it contained details of 210 prisoners who had been adopted by 70 groups in seven countries; in addition, 1,200 cases were documented in the Prisoners of Conscience Library.

At a conference in Belgium, a decision was made to set up a permanent organization that will be known as Amnesty International.

Another post that I find myself writing out of surprise and out of being ashamed of my fellow Lebanese.

For years now those in government, have been talking about democracy, about the rule of law, about using institutional channels to work rather than going on the ground, burning tires, closing roads and threatening. I sincerely supported them in the concept of rule of law and all that( though I do not support them in their political views, neither support the other side for sure)

Yet, at the slightest chance of threat to lose their positions in government through the same democratic and institutional patterns, they lose their logic and sense and then directly head to the streets.

Those same politicians who have been warning the Lebanese from any sort of chaos and street fights just few days ago…are now calling on their supporters to go to the street, to block roads, burn tires and participate in showing their “rage” (according to one of their spokesman’s choice of words).

I wonder if any of our politicians (from both sides) and their supporters (and I stress on supporters because I don’t blame the politicians as much as I blame those who vote for them!!!) have any sense of logic and honesty. Any kind of values and principles to live by and look up to…

I sincerely, honestly, deeply feel ashamed of those Lebanese who are cheering for this party or that. I pity those who are actually answering the call to go to the streets, those puppets that easily get exploited by the politicians to provoke chaos in our beloved country.

I dare you to say ENOUGH! Enough hypocrisy! Enough bullshit! Enough spreading fear amongst our streets and homes! ENOUGHHH!!

Date of Origin: The Constitution of UNESCO, signed on 16 November 1945, came into force on 4 November 1946 after ratification by twenty countries.

Mission: UNESCO’s mission is to contribute to the building of peace, the eradication of poverty, sustainable development and intercultural dialogue through education, the sciences, culture, communication and information

The International Bureau of Education (IBE), Geneva, 1925-1968; since 1969 IBE has been part of the UNESCO Secretariat under its own statutes.

As early as 1942, in wartime, the governments of the European countries, which were confronting Nazi Germany and its allies, met in the United Kingdom for the Conference of Allied Ministers of Education (CAME). The Second World War was far from over, yet those countries were looking for ways and means to reconstruct their systems of education once peace was restored. Very quickly, the project gained momentum and soon took on a universal note. New governments, including that of the United States, decided to join in.

Upon the proposal of CAME, a United Nations Conference for the establishment of an educational and cultural organization (ECO/CONF) was convened in London from 1 to 16 November 1945. Scarcely had the war ended when the conference opened. It gathered together the representatives of forty-four countries who decided to create an organization that would embody a genuine culture of peace. In their eyes, the new organization must establish the “intellectual and moral solidarity of mankind” and, in so doing, prevent the outbreak of another world war.

At the end of the conference, thirty-seven countries founded the United Nations Educational, Scientific and Cultural Organization. The Constitution of UNESCO, signed on 16 November 1945, came into force on 4 November 1946 after ratification by twenty countries: Australia, Brazil, Canada, China, Czechoslovakia, Denmark, Dominican Republic, Egypt, France, Greece, India, Lebanon, Mexico, New Zealand, Norway, Saudi Arabia, South Africa, Turkey, United Kingdom and United States. The first session of the General Conference of UNESCO was held in Paris from 19 November to 10 December 1946 with the participation of representatives from 30 governments entitled to vote.

The political divisions of the Second World War marked the composition of the founding Member States of UNESCO. It was not until 1951 that Japan and the Federal Republic of Germany became Members, and Spain was accepted in 1953. Other major historical factors, such as the Cold War, the decolonization process and the dissolution of the USSR, also left their trace on UNESCO. The USSR joined UNESCO in 1954 and was replaced by the Russian Federation in 1992 alongside 12 former Soviet republics. Nineteen African states became Members in the 1960s.

As a consequence of its entry into the United Nations, the People’s Republic of China has been the only legitimate representative of China at UNESCO since 1971. The German Democratic Republic was a Member from 1972 to 1990, when it joined the Federal Republic of Germany.

Some countries withdrew from the Organization for political reasons at various points in time, but they have today all rejoined UNESCO. South Africa was absent from 1957 to 1994, the United States of America between 1985 to 2003, the United Kingdom of Great Britain and Northern Ireland from 1986 to 1997 and Singapore from 1986 to 2007. 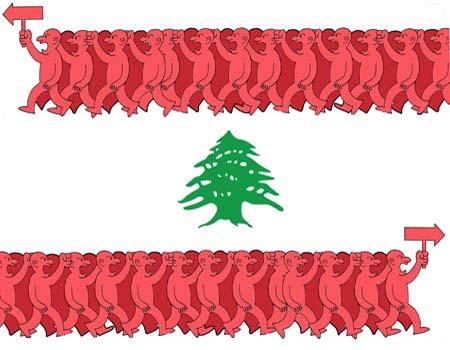 Well I wasn’t planning on publishing a post today, but the current political stance in Lebanon is just too much for me to stay silent.

I ask myself, and all those reading my post, to take a deep breath and reflect on all what is going on and consider the following.

The US, Saudi Arabia, Syria, France, Qatar, Iran and last but not least Turkey are all supporting the Lebanese sovereignty, civil peace and rule of law. Nevertheless they allow themselves, so freely and so publicly, to engage in Lebanese politics, meet politicians, make deals, negotiate, threaten, support one group over the other…etc.

All that just to ensure our SOVEREIGNTY … ironic right?

Well it doesn’t stop there…they even hold meetings in their own countries (ie Saudi/US meeting in US, Turkey/Qatar/Syrian meeting in Syria..etc) to discuss and agree on HOW should Lebanon be governed in the coming phase. After that they exchange agreements, refuse deals, work on others and they come here to discuss it with the Lebanese politicians (not strictly the officials…they visit anyone and everyone they want from heads of political parties to individual parliamentarians to ex-ministers…etc) …so much for sovereignty!!

Mind you I’m not against diplomacy, international affairs and all the care that Lebanon has always had from the fellow Arab nations and the world, yet I don’t think any country EVER has the right to intervene, directly or indirectly, in the internal affairs.

It’s funny and sad at the same time to see nations coming to teach us about diplomacy, democracy, rule of law, what’s right and what’s not…yet most of them just support one party and work with them in a way that ignites polarity in the country, links all the politicians’ decisions and actions with what is agreed on outside the country and put pressure on how should our government and officials act and work to suit the international agenda.

Lebanon..my dear beloved country, is struggling …gasping for a breath …and yet all those countries come in to support its sovereignty, but instead of saving it, they’re strangling us all!!!

It has been a while since I took the time to sit and write something for my blog, but I promise you that 2011 will be more abundant in posts than 2010 and I will do my best to keep the posts at as good a quality as they have been and better! 🙂

After asking around and checking the posts I have on my blog, I realized there has been a good vibe in general towards the series of posts on “International Clubs & Secret Societies” and many raised questions to know better about those clubs and societies.

In this context, and to take things one step further, I will be posting a series of posts on International Organizations. I will be selecting those that have been affecting our lives more than others, in one way or another. From UN related organizations (being a majority) to health organizations to Human Rights Organizations to Technical/IT/Engineering/Education…etc.

My aim in doing research and preparing for those posts is to provide an easy and quick way for people to get to know better about International Organizations all in one place without having to do much readying or researching. Yet by far it wont be a comprehensive list of organizations so your input and requests are highly welcomed if you would like me to post about any specific organization of interest.

As 2010 was my first year of blogging I am celebrating a successful year in terms of my blog-sphere. In this context I want to share with you some of the site statistics as done by WordPress itself.

The stats helper monkeys at WordPress.com mulled over how my blog did in 2010, and here’s a high level summary of its overall blog health:

In 2010, there were 26 new posts, not bad for the first year! There were 60 pictures uploaded, taking up a total of 3mb. That’s about 1 pictures per week.

The busiest day of the year was August 16th with 173 views. The most popular post that day was HARD Goals Vs SMART Goals .

Where did they come from?

The top referring sites in 2010 were linkedin.com, facebook.com, mail.live.com, en.wordpress.com, and mail.yahoo.com.

These are the posts and pages that got the most views in 2010.

Knowing the Past to Understand the Present and Plan for the Future July 2010
8 comments and 1 Like on WordPress.com,

WikiLeaks… or is it? December 2010
5 comments and 1 Like on WordPress.com,